On Manners and Meeting New Friends 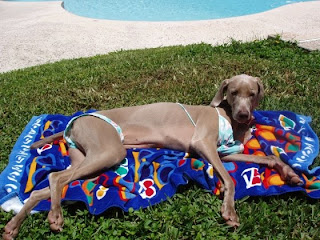 I hope she is wearing sunblock!
Posted by Maggie at Wednesday, May 26, 2010 No comments:

I'm a little late on this one. My love of sticks never gets old. Here is what I was up to today while on a walk. Hope you smile.

Sit, Stay, and Other Feats of the Therapy Dog

As many of you know, one important task of any well mannered therapy dog is an ability to sit and stay. This comes easy for many dogs. It's comfortable to sit, for example. Additionally, many of us discoverer than when we sit, good things happen like treats appear or we get a toy. That's pretty cool.

Others find this task a little more difficult. Being part basset hound, I have a mind of my own. I give my best effort, most of the time. Even when I don't want to I will give a begrudging hover over the ground giving the illusion of sitting. Still, there are times when I'm just going to ignore the request. Why? Because I feel like doing something else. My history is replete with ancestors who were selected for thinking on their own. I follow scents. I make choices about what is interesting and then follow those choices with my nose.
The problem is mostly with this test I'm taking. To become a registered therapy dog, I have to demonstrate a good sit/stay (in addition, there is the talent competition and the swimsuit competition, I'll talk about that later). More then the test, being able to sit/stay is a useful thing. It makes shopping at the pet store easier on the humans. It makes people more interested in saying hello to me when I can sit/stay and wag my tail (though I think it's much more interesting to climb up on their shoulders and provide copious kisses).
What's a frustrated human to do? Real world training. I'm nearly 100 percent compliant with a request to sit/stay in situations where there are few distractions. Add in something more interesting and your results might vary. 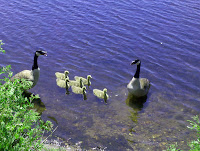 The other day while on a walk along the river we stumbled upon an ideal situation for some real-life practice. Two birds and their babies were enjoying some shade. I wanted to sniff, investigate, and perhaps heard them into the river. I actually did get to do that with another family of geese. Here is a view of my handiwork. They do not look nearly as amused as I was. The more they yelled at me the more I decided that herding them into the river was the right thing to do. It's not very nice that they complain after I encouraged them to take a refreshing swim.

The idea here is to have an opportunity to practice a sit/stay with a lot of distraction. Those of you who following along here know that I've practiced this in lots of interesting places like the subway station, at the river, and just about everywhere I go.

It's takes a lot of patience. There is a lot of stopping and starting. Try rewarding your pup when they sit down for just a second. If they sit for two seconds, add in the word stay. Build it up longer and longer and before you know it, your dog can sit/stay like I did in with these geese. I sat for a full minute before the human said "okay" which is my cue to get back up and do whatever it is I'd like to do. In this case, I nudged the family into the water for a refreshing dip.

Remember the premack principle: a more probable behavior will reinforce a less probable behavior. In this case, I'm much more likely to herd geese. The human "reverse engineered" this over time so that I get rewarded for a sit/stay by getting to later chase geese.
Posted by Maggie at Friday, May 21, 2010 2 comments:

Some things are so cute they require no explination. Check out these clips:
Posted by Maggie at Wednesday, May 12, 2010 No comments:

Email ThisBlogThis!Share to TwitterShare to FacebookShare to Pinterest
Labels: Behavior, Training, Try This

Maggie and the Hydrant 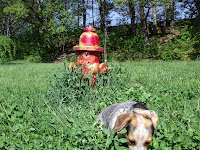 So a recent reader of my blog posted a comment saying that her dog Mandy was really afraid of cameras. After careful observation they noticed Mandy was responding with fear to flash photography. After practice outside without the flash, and then practice outside with the flash, Mandy has become a little more accustomed to getting her picture taken. Still, if there are lots of people with lots of cameras, she's a little afraid. Who likes being chased by paparazzi? I know I don't. 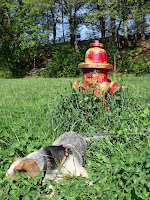 While I've never been fearful of cameras, my human has still been prone to finding me annoying while he takes my picture. I don't sit still. I can't tell you how many great pictures he gets of the tip of my tail or the inside of my mouth (I love trying to lick the camera). 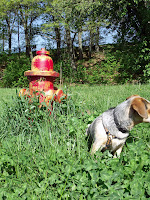 This is apparently a common dilemma. Never fear as I have a few simple solutions. First off, you need a lot of patience. Let go of taking the pictures you think you want. Go with the flow and let your dogs be dogs. They'll do lots of cute things. Focus on catching something unexpected rather than composing what you want. It makes for better images anyway. 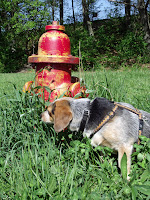 Secondly, if your pup is afraid of the camera go slow. Think of it from our point of view. You disappear behind a strange object. Sometimes you get mad or anxious at us when you are behind it. When we least expect it, the thing will flash a bright light at us. You'd be scared too. Make it into a game, and incorporate the camera into our daily activities. Have the camera with you when you feed your puppy a meal. Put the camera in front of your face and give us a bit of our favorite food. Before you know it, the camera will be an object of delight rather than one of fear.
Finally, take lots of pictures. Digital photography is cheap. Take hundreds of pictures of your animal. At first maybe you'll get an interesting one for every 50 images. You'll quickly begin to learn what works and what doesn't. The quality of your compositions will improve.
As you can see, I did a photo shoot this morning by a local fire hydrant. As usual, there were a voluminous amount of photos that just didn't work. These were just a few. Part of the problem is that the human's digital camera is a bit on the slow side. The second between when he presses the button to when the image is captured is just enough for me to find something else to do. The first photo I am demonstrating how I like to move just a bit out of the frame. Isn't that nice? The second photo demonstrates how I like to hide my face. Photo three is evidence that I have a wandering eye: there were birds that needed investigation. In the last shot above I'm sampling a new variety of grass. It was might tasty.

There were a trio of shots that ended up being reasonable. Here are my picks for the day: 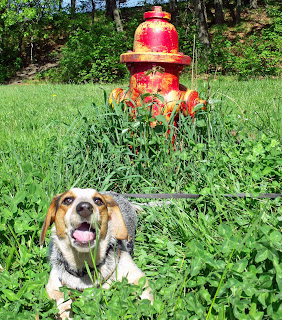 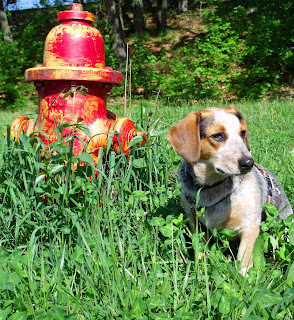 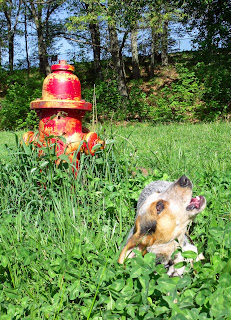 Here is a video double play demonstrating some of the things I do when I'm not roaming around Harvard Square working hard as a therapy dog. I suspect it is also ample evidence that my human has a little too much free time on his hands.

Here is my gentle side:

And here is my rough side:

Email ThisBlogThis!Share to TwitterShare to FacebookShare to Pinterest
Labels: Smiles, Training
Newer Posts Older Posts Home
Subscribe to: Posts (Atom)
Therapy Dog (n): (1)A dog training to provide affection, comfort, and love in therapeutic settings; (2) A gentle presence that makes talking about hard things just a little easier; (3) A clown that reminds us that even when things are difficult, the uncomplicated animal-human bond can make us smile.