What Happens When you Tickle a Gorilla?

They giggle, of course. Wouldn't you?

If you want to hear more about the story, check out this clip:


Thanks to Steven Motson for spotting this clip!
Posted by Unknown at Wednesday, November 30, 2011 1 comment:

So this video has been making the rounds lately. A group of beagles who had only known life inside metal research cages were rescued. There sure are awfully cute.

Posted by Unknown at Tuesday, November 29, 2011 No comments:

Email ThisBlogThis!Share to TwitterShare to FacebookShare to Pinterest
Labels: Video

Puppy in a Pumpkin 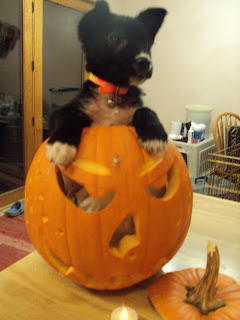 Some things are just too cute. This is one example. For the whole story, check out Ahnung's blog.
Posted by Maggie at Sunday, November 27, 2011 No comments:

Contest: Which Banner Picture is Your Favorite?

It's that time of year to update my banner on the blog. Here are some of my favorite pictures. Vote for the one you like best: popular opinion rules. Your favorite one will be retouched and posted on the blog for Winter 2011-2012.

Yesterday was a super busy day for me. I spent about a half an hour outside of of Hannaford Grocery Store greeting customers and passing out a little therapy dog love. I went to a place near the grocery store called Fort Hill Park (click here to learn all about that adventure). Then early in the evening it was time to head out to Nashua New Hampshire for their annual Holiday Stroll. One of my humans had volunteered to help set up a local church for some of the festivities.

Large public crowds like this aren't for dogs who aren't accustomed to being around a lot of people. It really was a bit too much for me. Thousands of people milling about created all sorts of distractions. My favorite was the "street food". I found it delicious, my human however found himself exasperated prying chicken bones out of my hungry little mouth.

Eventually my human scooped me up as we strolled down Main Street. This was much better for me: my short legs and strangely long body is a very inconvenient body type.When I was up at eye level I was able to scan the crowd for those who were most in need of my therapy dog attention.

The best was a few moments I shared with a young gentleman in the crowd. He was in his early 20s and at the holiday stroll with his father. It appeared that he had some sort of developmental disability. He saw  me and told me what a gorgeous dog I am. His father prompted him to ask my human if he could pet me. Before the human answered I stretched out from my humans arms and pressed my nose against the young man's face. He pet me for a bit, he spoke with the humans for a bit, and we were on our way. 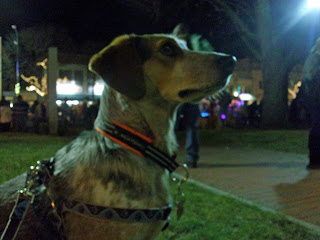 Isn't it easy to wish someone a happy holiday?

Here I am between providing therapeutic kisses outside of Hannaford grocery store. 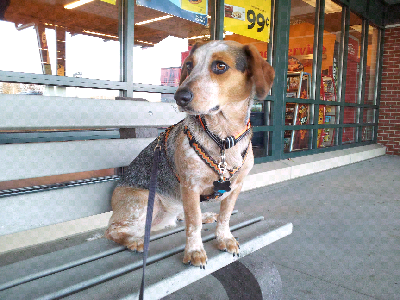 Posted by Unknown at Saturday, November 26, 2011 No comments:

Email ThisBlogThis!Share to TwitterShare to FacebookShare to Pinterest
Labels: Life In A Day, photo

NORFOLK, Va (Reuters) - As the number of veterans grappling with the psychological scars of war mounts, a miniature Australian Shepherd named Jonas represents a newer breed of treatment for those suffering from post-traumatic stress disorder.

Jonas, a peppy 2-year-old, is a legal service dog, trained to scan owner Ian Lord for signs of stress oranxiety and respond with licks, cuddles and demands for pats.

Lord, a 25-year-old Air Force veteran in Norfolk, Virginia, credits his specialized pet with helping him cope with the mental aftershocks of war.

"He makes it a lot easier to recover from a trigger, like sounds of a helicopter overhead," Lord said. "The difference is, instead of getting wound up about it the rest of the day, it's like OK, go outside and throw a ball around, or just cuddle up to him a bit and kind of snap out of it."

But other experimental treatments also are being used, including yoga, acupuncture, meditation and psychological service dogs like Jonas.

"There is an interest in the PTSD community in exploring a variety of different ways to approach the problem," Batten said.

The department doesn't know how many veterans are using service dogs as part of their treatment, and there is debate over whether the approach is beneficial.

PTSD dogs perform an exercise called "backing," where the dog walks directly behind the veteran and provides a sense of protection from unknown, imagined and frightening things, said Lynette Nilan, the department's strategic planning and measurement director.

"You kind of get into this (debate) of, is it in the patient's best interests to deal with those unfounded fears ...(or to) reinforce those fears by having a dog stand behind you to protect you from something that you really shouldn't have to be protected from," she said.

A new study is underway to determine whether psychological service dogs can help veterans overcome PTSD and, if they prove effective, to develop usage criteria and guidelines. The study will aim to pair at least 200 dogs with veterans in Florida and Colorado, Nilan said.

Carol Borden, executive director of Guardian Angels Medical Service Dogs, Inc. in Williston, Florida -- one of the organizations taking part in the study -- said dogs are specifically trained according to an individual's needs.

"We talk to each veteran and find out exactly what their challenges are," she said. "There are multitudes of things we can teach the dogs to do, depending on each individual's circumstances."

Lord, who now works part-time while applying for graduate school, saw four years of active duty as a loadmaster in the Air Force, flying missions carrying troops and cargo into Iraq, Afghanistan and surrounding countries.

He said he was diagnosed with PTSD after suffering "almost the stereotypical meltdown" in 2010, when a simulation-style training course stirred suppressed memories of getting shot at in Iraq.

Lord was removed from flight status and later was honorably discharged from the service for unrelated reasons, he said.

Jonas came into his life thanks to his wife Megan, a 23-year-old medical student. She had been training Jonas as a therapy dog for hospital patients, but it wasn't a good match, she said. Hospital dogs weren't allowed to lick, and Jonas did a lot of licking.

The couple noticed Jonas would start cuddling and licking Ian whenever he exhibited PTSD symptoms, such as anxiety, depression and sleeping problems.

That sealed the pooch's fate as a PTSD service dog. His service is prescribed by Lord's psychiatrist, giving Jonas the same legal rights of entry to businesses and public spaces as guide dogs for the blind.

"As soon as people hear he's a PTSD dog, the next thing out of their mouths is, 'Oh, thank you for your service, sir,'" Lord said. "They connect the dots pretty quickly."

(Editing by Colleen Jenkins and Greg McCune)
Posted by Unknown at Sunday, November 13, 2011 No comments:

“In dreams I can fly” by Manuela Kulpa 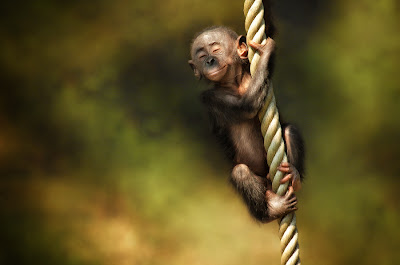 Email ThisBlogThis!Share to TwitterShare to FacebookShare to Pinterest
Labels: Photos
Newer Posts Older Posts Home
Subscribe to: Posts (Atom)
Therapy Dog (n): (1)A dog training to provide affection, comfort, and love in therapeutic settings; (2) A gentle presence that makes talking about hard things just a little easier; (3) A clown that reminds us that even when things are difficult, the uncomplicated animal-human bond can make us smile.