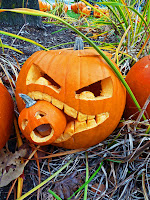 I got to go to the 20th Anniversary Pumpkin Fest in Keene New Hampshire. It was so much fun, though I just simply don't understand why I wasn't able to sample one of the 22,949 pumpkins. Is that asking for too much? Over to the left is a particularly tasty looking pumpkin at least to me!). Below that is a pumpkin that got to eat another pumpkin (so unfair!). Even though I didn't get a taste of it, I did manage to snag myself a half a hamburger that was discarded in a pile of leaves along with a donut of unknown flavor.
I was a super well behaved dog. Good thing too, as unbeknown to the human, there were no dogs allowed! On one level, it makes sense that there are no dogs allowed. Many humans don't take time to properly socialize dogs: if everyone brought their dog it could become a very unsafe situation. Many humans also have this habit of not paying attention to what is going on around them and their dog which also can cause an unsafe situation. That's not so good either. Then of course there is the poop. I'd pick my own poop up if I had opposable thumbs, but since I don't I depend on the human. Why do some humans have so many problems with that? 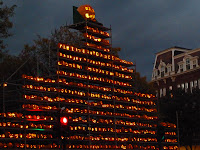 Still, despite the human being a lawless individual who brazenly broke the ordinances of the city of Keene, this was a great opportunity to show off my confidence. I was pet, rubbed, ogled, and otherwise adored by the hordes of humans who were roaming around the downtown city streets. I even got to meet a few dogs (those little criminals!) and had a lovely time licking a particular law enforcement professional who I decided I wanted to greet.

How come I had such a good time? Socialization and past positive experiences. Since the day I left my foster home when I was just a few weeks old I was exposed on a consistent basis to new and novel situations. The human took me to cities, the country, farms, malls, on elevator rides, car rides, escalator rides, etc. I had fun positive experiences with all of these things. My favorite of all was when we would sit in Harvard Square or inside the subway station and crowds of people would gather around me petting me. 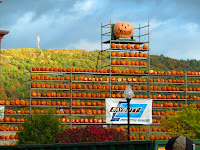 The human made sure I was safe. He made sure that as soon as I showed signs of being tired or becoming afraid he'd reduce the degree of stimulus. Over time, these experiences transformed me from a shy puppy into a confident dog who can (with supervision) safely handle situations like the Keene Pumpkin Fest.
You can learn more about socialization here, here, or here. You might also want to check out some of my earlier post about my own socialization.
Posted by Maggie at Sunday, October 24, 2010 No comments:

Why Is The Therapy Dog So Tired?

So many of you ask why Magnolia the therapy dog is so tired when she first gets to work. Well you no longer have to wonder. The human is convinced that a tired therapy dog is a good therapy dog. Among other things I generally get about two hours worth of walks a day, plenty of play time, and plenty of space for rest.
When the weather is still nice the human likes to head into the office a little early so we can play in a fenced off area. I generally will locate a stick along the walk and carry it with me. This task gets reinforced because if I have a stick when we get to the park I get to do this:
Posted by Maggie at Friday, October 15, 2010 No comments:

Email ThisBlogThis!Share to TwitterShare to FacebookShare to Pinterest
Labels: Life In A Day, Real Stories, Training, Try This

Saturday morning can only mean one thing: time for school! Here's a few moments captured from school this past Saturday. Featured are Nike the black Labrador, Gracie the Corgi, and Jake and Sonny the Golden Retrievers. We are all either pet partners or pet partners in-training with New England Pet Partners. 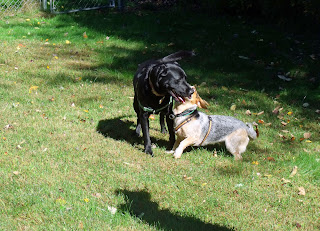 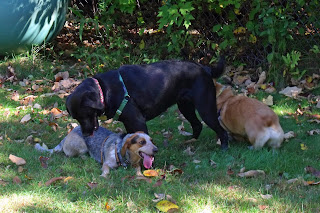 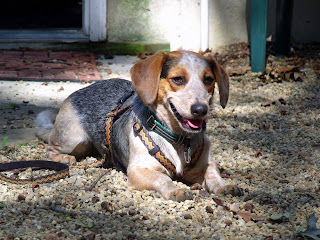 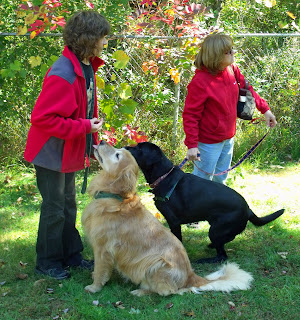 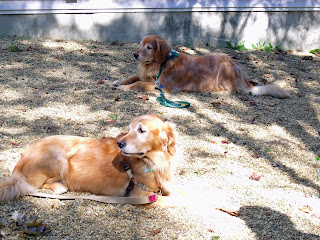 Email ThisBlogThis!Share to TwitterShare to FacebookShare to Pinterest
Labels: Life In A Day, Real Stories, Smiles


Dog training can be awfully competitive for the humans. It appears that there is the expectation that you all are supposed to get us dogs to sit, come, roll over, wave, and generally respond to your ever whim on command. I guess that's why it's called obedience school.
The human and I had a rather long discussion about this yesterday while walking into the office. He's worried about my upcoming evaluation to become a registered therapy dog for the Delta Society. Part of that evaluation is the neutral dog test: on a lead, I'm expected to walk past a neutral dog without barking, playing, or otherwise tugging on my lead. I'm not so good at this. I like other dogs, you see. As much as I enjoy my companionship with humans, it's nice to hang out and play with my fellow canines.
The human was feeling annoyed with me and worried. On the way into the office we passed by several dogs. I wanted to play with each and every one of them. The human did a lot of comparisons. They weren't tugging on their leads trying to come play with me like I was. He thought those other humans were better. Better dog trainers, better people. 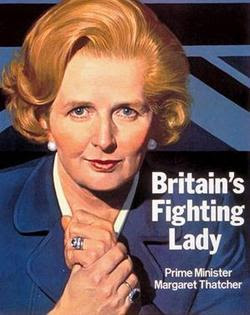 When the human gets like this I like to call it his Iron Lady moment. What follows is a whole lot of sit, stay, come, leave it, etceteras. I don't mind it too much: he generally pets me a lot when he gets like this and I get some major rewards. Food, attention, pets, and good girls. It feels good and does increase the likelihood that I will listen to him.
Where the Iron Lady goes wrong is his expectation that I'm always going to to listen to him. It's just not that simple. While I am a dog and very invested in pleasing him, I also occasionally have some ideas of what I might like to do. I might like to go eat a squirrel, for example. Sometimes the cute little fuzzy dog off into the distance might alert me to something that smells good and I'd like to go check it out. During these occasions I'm less likely to be "obedient" and listen to my human. Sure it's annoying. Sure, sometimes it's even dangerous. In the end, however, it's part of being with a dog. I'm not always going to listen--and it's not a failure of the human. It's simply part of what it is like to be in a relationship with another creature.

The human and I don't often consider the work we do together obedience training. Rather, we consider it relationship building. When he's got his act together and he's not being the Iron Lady he is much more invested in creating experiences that build our relationship together. The more we are connected, the more I'm going to want to pay attention to him and the more I'm going to be invested in filling his requests. Similarly, in a  strong relationship the human is going to know that sometimes the draw of a squirrel or a goose it powerful and I'm going to want to investigate. When we have a strong relationship we have one in which there is a willingness to take turns, to compromise, and to have mutual experiences.

Mind you none of this is to suggest that the human doesn't need to protect me. Sometimes he needs to say no to my desires. There might be things that I don't understand (like hurry up, we have a patient that is going to be waiting). There are things that I might not know are dangerous (like cars, which I am totally oblivious too). A good relationship means that both creatures are kept safe. The human does his part--he gives me limits (like I'm not allowed to chase geese across Memorial Drive where cars are zooming by at 50 miles per hour). I keep him safe by alerting him to unsafe situations that he might not able to smell.

It's a relationship--not a one sided dominance/submission situation.

The sadness of how wrong this can all go was highlighted to us this morning. I was playing with my friend Meadow, a gorgeous Sheppard mix. The humans were talking about a neighborhood dog. Meadow's human had seen a car park on the street and someone disappear into the back seat. It looked like the person in the back seat was punching someone. The woman ran out to investigate and sadly found that there indeed was a young man punching someone: he was punching his dog. Why did this man punch his pit bull? "He runs away from me and chases the cat."

This is the sort of thing that happens when we start to think that the relationship between dog and human is one of dominance and submission. Humans become angry when we dogs don't always listen--when we don't always respond.

It's about the relationship. Wanting to please one another, wanting to keep each other safe, having the awareness that two creatures often have different needs, and having the ability to find ways to negotiate those needs in a safe, sensible way.
Posted by Maggie at Friday, October 01, 2010 No comments:

Email ThisBlogThis!Share to TwitterShare to FacebookShare to Pinterest
Labels: Behavior, Compassion, Real Stories, Relationship, Training
Newer Posts Older Posts Home
Subscribe to: Posts (Atom)
Therapy Dog (n): (1)A dog training to provide affection, comfort, and love in therapeutic settings; (2) A gentle presence that makes talking about hard things just a little easier; (3) A clown that reminds us that even when things are difficult, the uncomplicated animal-human bond can make us smile.