Kitties get to have all the fun. I'm going to have to head out and see if I can find a suitable sized tortoise to ride upon. Maybe this is how I will arrive in the office very day? That would be fun.

Pondering the Meaning of Compassion on the Rail Trail 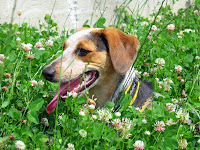 Sunday was just one day shy of longest day of the year--also known as summer solstice. While it wasn't also the hottest day of the year, it certainly seemed like it. The temperature was almost 90 and the humidity was so high my cold nose and panting couldn't keep me cool. As you see over to the right, I spent a great deal of time hiding on it fields of clover. They are a fantastic place to find bumblebees, little morsels of discarded foods, and chipmunks. 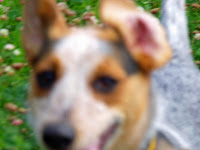 Chipmunks? Whoops. Wait just one minute. Did someone say chipmunks? Next to squirrels, I think chipmunks are my favorite thing to chase after. They seem to be slower and pay very little attention to me. I've gotten close to catching them but my lead always seems just a little too short. I wonder how that happens? Anyway, I spent an awful lot of time scampering back and forth across the trail. The humans walked about five miles. I probably did closer to seven. There was so much to look at and see as I scurried back and forth across the rail trail. Do I look blurry in this picture? That's because I was in near constant motion. Chipmunk on the right, bird on the left, field of clover on the right, and well, you get the point. It was a lot of fun.


At the half way point we stopped at a store called Traveling Rhinos and Friends. I was sipping my water when one of the humans went in to purchase something with a little more flavor. A few minutes later the shopkeeper appeared along with two small dogs. We did the usual "nice to meet you dance" (the dogs, not the humans). Before I knew it I was escorted into the nice air conditioned store. What a nice surprise.

Both dogs were rescue dogs. I was rather taken with Buster. His story was a sad one. The story I was told was that Buster never had the opportunity to play and interact with other dogs. His previous owner kept him locked up in a cat carrier for most of the day--every day--for four years. One day Buster finally had enough and didn't want to go into the cat carrier. He apparently bit his owner who then surrendered him to the shelter. Buster was labeled a vicious dog.

In the end, Buster was lucky: he found a new home that took him in, showed him lots of patience and love, and helped him have a life worth living. Buster is also lucky because he seems to have some extraordinary social skills. He approached me carefully and slowly. My human who is generally extremely cautious was extraordinarily so when we met because of Buster's story. Within fifteen seconds he had assessed the situation and relaxed. There were no signs of aggression and many calming signals: yawning, licking, turning head away, play bow, sniffing, walking slowly, and walking in a curve.

It's useful to know about these calming signals. It's even more useful to learn to recognize them in your dog as well as in other dogs. Once humans learn to have some skill at interpreting canine behaviors things go along a lot better. Anyway, for a dog that hasn't played with other dogs, we had an awful lot of fun. We rolled, played, and generally frolicked all around the air conditioned store.

Buster's humans took a leap of faith and demonstrated a great deal of compassion for him. He had been considered a dangerous dog: one that was very likely going to be euthanized. There are dogs out there that are dangerous. It's a serious problem, requiring serious attention. I don't know for sure what made these humans look at Buster differently. Perhaps the humans took the time to look at the facts.  Maybe they saw something deep inside the dog. It's unclear and that's really not all the important. 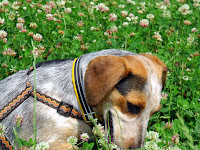 The humans demonstrated a great deal of compassion for Buster. In hearing his story, they were moved. They had some sort of emotional experience that was caused by the experience that Buster had. On the walk back to the car I got to thinking about the nature of compassion.

Compassion is at the heart of what many companion animals freely offer humans, yet do we ever really stop to wonder what compassion really is? Many comment that animals don't judge, offer unconditional love, and other such things. All that might be true, and all those are wonderful gifts, but none really represent the compassion that companion animals can offer a person. While no one knows for sure what goes on within our minds, a careful observer can notice how many animals respond to the suffering of others.

Over the first year of my life I've shown myself to be a dog that seeks out those who are suffering. Sometimes it's obvious, like when I'm rubbing tears off a face with my nose. Sometimes it is demanding when I'm pulling my human around Cambridge and "stumble" upon a person sitting alone on a park bench or huddled under a bridge. 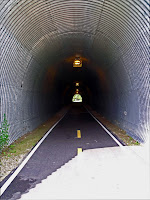 While I'm just a small dog, might I add one thought? Compassion is a word with direction. As quoted above, in the presence of pain experienced by another being, compassion moves the heart to hold and shelter the distressed.  I think the Buddha might have forgotten to say something. Compassion also transports you from where you are to somewhere else. Compassion can shine like the light at the end of the tunnel and draw you to a place you hadn't known existed. 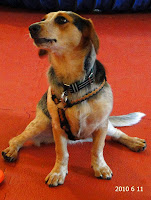 Now that I'm a year old it's important that I keep myself healthy. I'm finding that doga (like yoga, but for dogs) is an ideal practice for me. My teacher Maureen, who recently started a website called Daily Doga, captured me in the frog pose.
Posted by Maggie at Thursday, June 17, 2010 No comments:

Email ThisBlogThis!Share to TwitterShare to FacebookShare to Pinterest
Labels: News

Her are some pictures of my brother Cooper. He recently found me on Facebook. I'm starting to think it would be fun to have a family reunion at some point this summer. I wonder if the nine of us plus mom might be able to coordinate a little something? 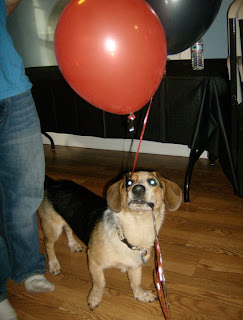 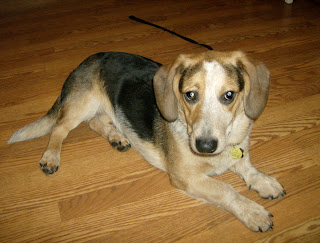 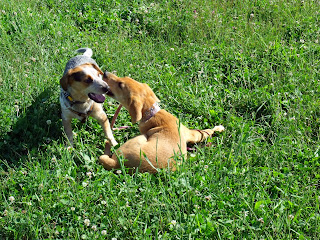 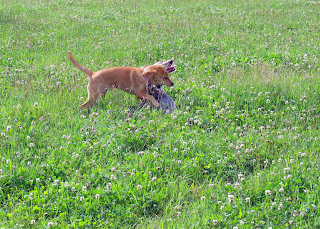 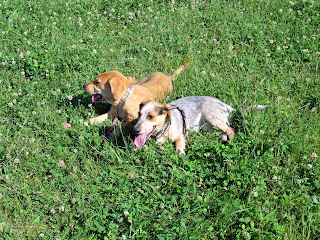 I listen well enough: I sit, stay, come when I am called (unless there is squirrel around), and have a few cute tricks up my sleeve. For those of you who have been following along with my adventures, you've probably figured out that I also have a mind of my own. There are some things that just simply have to be done. The human has generally learned it is best to follow along with me when I get into one of these moods.

Sometimes of course I'm just being an obstinate basset hound. I remember where interesting things are along our walk to and from the office and I insist on revisiting places that I like. For example, on Green Street there is a tree branch hidden under a hedge of boxwood. I like to stop there every night on the way home and play tug with the stick. I found a rat scurrying around near the old police station in Central Square three nights ago. I insist on pouncing on that very same spot every time I encounter it. I'll pull the human across the street if we are on the wrong side.

The human finds the stick amusing. He finds the rat down right disgusting. Other times he finds himself just a little amazed at where my little mind takes us. For example, yesterday during a walk I started dragging him around a corner. The human wasn't in the mood to be dragged and he started complaining about my behavior. I ignored him and kept tugging him in a different direction. He finally saw things my way and let me lead. A couple of minutes later we turned another corner and walked toward a woman sitting on a park bench. She was crying and at first didn't seem like she was very happy to be interrupted. I wagged my tail more and jumped up next to her and pushed hard against the side of her body while she petted me for a few moments. She scratched behind my ears, said thank you to my human, and walked away.

You humans might thing that perhaps I heard the woman crying (dogs do, after all, have a sharp sense of hearing). Others might think that I used my high-powered sense of smell and detected the distress someone was experiencing off in the distance (again, dogs to have a sense of smell that is hundreds of times more sensitive than humans). Others of you might just thing this was a coincidence: my pulling of the human toward this spot had nothing to do with the woman crying on the bench.

The only two that really knows what happened was the woman on the bench and me, the dog on the leash. I'll leave it for you to decide what you believe. What are your thoughts?
Posted by Maggie at Friday, June 11, 2010 1 comment:

The news has offered up a lot of sad and devastating images from the Gulf of Mexico. With oil still gushing into the ocean, unknown and indescribable devastation is occurring.
What better way to bring a smile to our faces (and a wag to our tails) to see a bit of good news? Here is a clip about a local family of birds. I've noticed them several times on the way home from work. Now I know what they are. Seeing people take interest in--and be in awe of--nature gives me a lot of hope.

Email ThisBlogThis!Share to TwitterShare to FacebookShare to Pinterest
Labels: Smiles
Newer Posts Older Posts Home
Subscribe to: Posts (Atom)
Therapy Dog (n): (1)A dog training to provide affection, comfort, and love in therapeutic settings; (2) A gentle presence that makes talking about hard things just a little easier; (3) A clown that reminds us that even when things are difficult, the uncomplicated animal-human bond can make us smile.