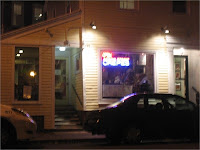 So I've been meaning to tell you all about my most recent discover. It's the greatest discover ever. Really. I don't know why I ever noticed these things. To what am I referring? Windows. That's right. Windows. Did you all know about them? A couple nights ago after work we were walking back to the car. I've probably sniffed right past this spot a good 100 or so times in my life but I never actually bothered to look up. My nose is usually down to the ground savoring all the ground-level aromas.
So here it is, nine at night, and I finally lift my head up and discover this thing called a window. It just wasn't any window. It was the window on the left of the picture that belongs to the restaurant that I'm told is named Arrow Street Crepes. It was also a very special window as inside of it I discovered this wonderful woman who was munching a crepe. This was clearly a moment of two lovers meeting for the first time. I looked up, noticed her, and tilted me head. She looked down at me and smiled. I started wagging my tail. First I just fluttered the tip of my tail. I wasn't sure what this whole human behind the window thing was. As soon as she started smiling at me I went all out wagging my tail with all all the gusto I could muster. The woman smiled even more, so I wagged even more.
We stood there for a few moments--human and dog look at each other and showing each other how happy we were to see each other. I've got no real way to know what she was thinking: she never came out behind the glass. The only thing I do know is that when I took the time out of my sniffing to look up she happened to take the same moment to look down from what she was eating and we both made a connection. It couldn't me more simple than that--two creatures reaching out and making a connection that brings a moment of happiness into the world.
When's the last time you looked up?
Posted by Maggie at Thursday, November 18, 2010 No comments:

Winter is almost here. That means a couple of things. First off, it's been cold at night so all the ticks are dead. Second, there isn't a lot of sunshine left to enjoy in New England so it's best to get outside and soak it all up. As it turns out, only one of these statements are true. The human found a tick on his hiking companion. I made out much better: I had a bath to remove all the forest dirt but there were not ticks to be found on my body.
Below are a few images from my adventures today. 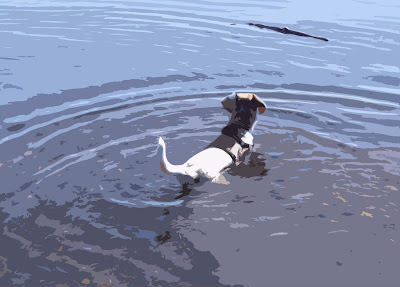 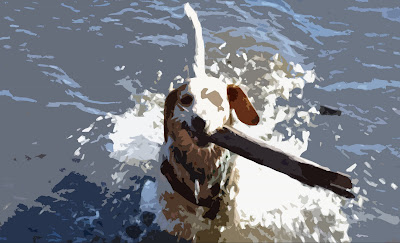 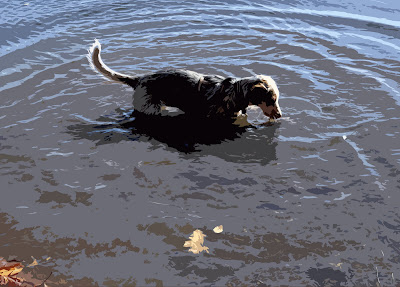 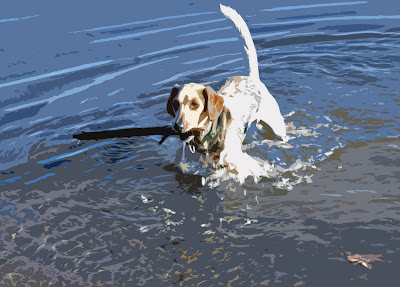 Posted by Maggie at Saturday, November 13, 2010 No comments:

When hats, dogs, and humans meet 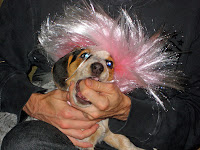 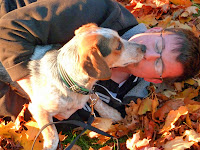 Please direct your attention to the following three images. In the first the human and I are having a tender moment resting in the evening sunshine. Doesn't it look idyllic? The warm light of the autumn sun makes us glow. I'm gazing at him with my undivided, unconditional love. You'd think he'd just enjoy it, right? Of course  not. 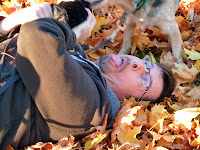 Out of the blue the human surprises me with a hat. Not just any hat. It's that stupid barmaid hat that I told him that I utterly despised. To make matters worse, he had the nerve to stick his tongue out at me. He knows that drives me nuts. When will he ever learn? 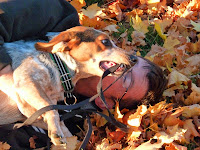 Here in this last picture I'm again finding myself having to give the human a "talking to." I'm threatening to put a leash on him if he doesn't learn to behave. What do you all think? How can I get through to him so he stops trying to make me wear hats?
Posted by Maggie at Saturday, November 06, 2010 No comments:

So after multiple requests, I'm begrudgingly posting some pictures of me in my Halloween costume. I work so hard at having my tough-girl image (playing with all the big dogs, running with sticks, bossing around dogs four times my size, etc.). These pictures show a different side of me that is well, a little embarrassing! 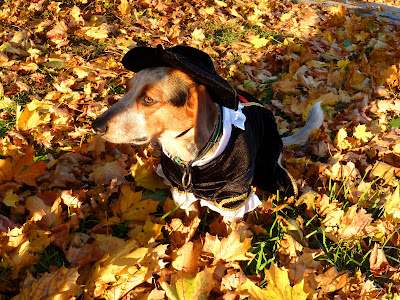 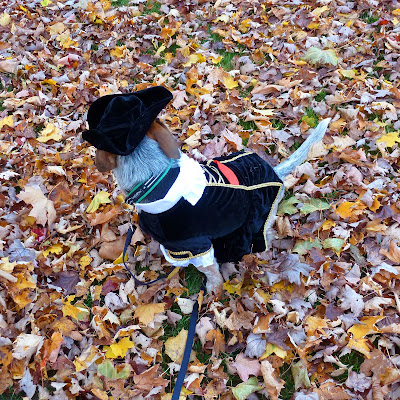 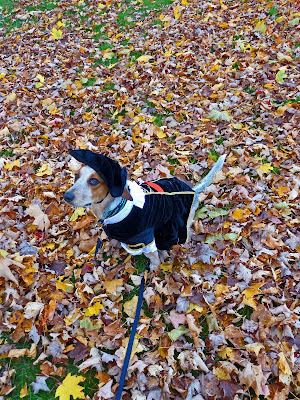 Posted by Maggie at Saturday, November 06, 2010 No comments:

Email ThisBlogThis!Share to TwitterShare to FacebookShare to Pinterest
Labels: Photos, Real Stories, Smiles
Newer Posts Older Posts Home
Subscribe to: Posts (Atom)
Therapy Dog (n): (1)A dog training to provide affection, comfort, and love in therapeutic settings; (2) A gentle presence that makes talking about hard things just a little easier; (3) A clown that reminds us that even when things are difficult, the uncomplicated animal-human bond can make us smile.