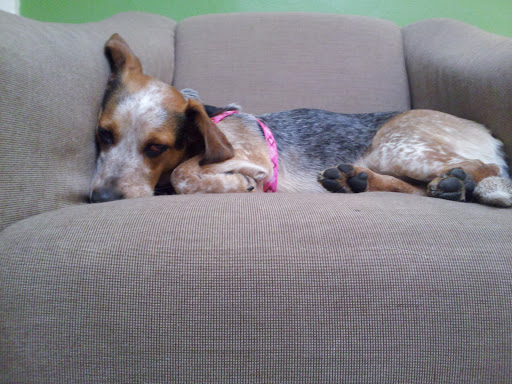 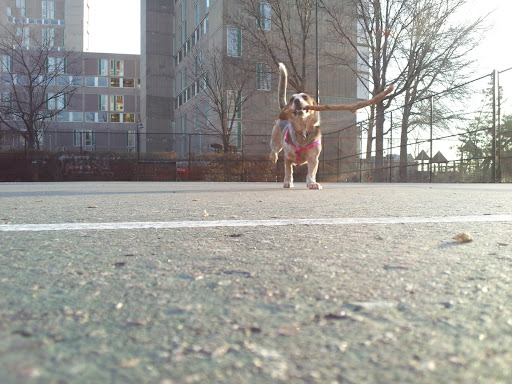 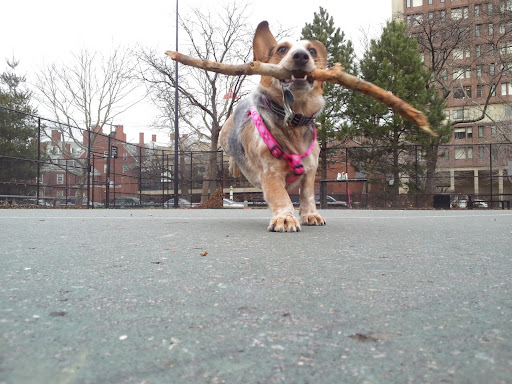 Well that was unexpected. On the way into the office this morning I was engaged in my usual shenanigans: I found an enormous branch and was crossing the street in Central Square while holding said stick in my mouth.  The below video is just a simulation of this morning. The actual stick was three times larger (no joking!).

Anyway, as I was crossing the street I noticed two young women eyeing me up. Perhaps they were jealous of my fabulous stick? When I got closer (and the human warned me not to knock them out with said stick) they approached and asked about me.

"What kind of dog is she? My sister has a dog that looks just like her!"

They humans discussed a little more. Then they discovered the most amazing thing. The young woman's sister was in a horse show in Kentucky two and a half years ago. While there she discovered a large litter of ten puppies who had been abandoned. Somehow she managed to sneak Goose away when he was just a couple of weeks old. The remaining nine puppies and mother were taken to New Hampshire and fostered by Peace and Paws.I was one of those nine puppies. If you want to hear more about my story check out this link.

Goose moved to New Jersey and has been leading a very happy life. He's my brother. Who would have thought that walking down the street in Cambridge I would meet a woman who has a sister who lives in New Jersey that saved my brother Goose.
Posted by Unknown at Wednesday, January 25, 2012 No comments:

The View From Here: Morning Play in the Snow Edition 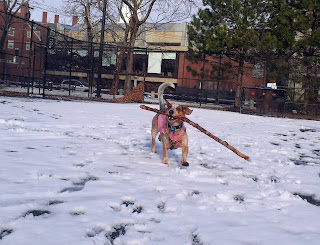 We were expecting terrible weather this morning in New England. Winter Storm over night, icy treacherous conditions this morning. As it turns out, we got a little snow and this morning features a brilliant blue sky. Not knowing this, the human left early for work. His preparation was my gain: I got extra play time.
Posted by Unknown at Tuesday, January 17, 2012 No comments:

The View From Here: Live in Front of a Studio Audience Edition

So I've discovered me new favorite thing: performing in front of an audience of children. The human and I had a little extra time before work so I got to do my favorite stick chasing activity. Slowly this crowd of children gathered watching me. They got to learn a little (always ask before touching dogs!), they got to pet me, and best of all, they got to cheer for me as I ran back and forth.

By the time it was time to head to the office I was exhausted. I slept clear through the end of the day!

The View From Here: I Will Stay Here Edition 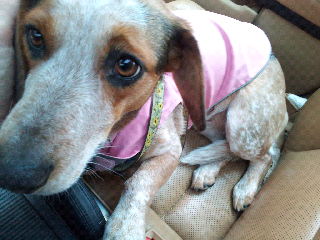 Posted by Unknown at Thursday, January 12, 2012 No comments: 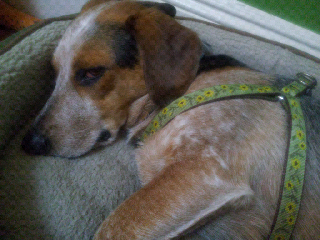 Unconditional Positive Regard: It's Not Just for the Dogs


"The curious paradox is that when I accept myself just as I am, then I can change."
-- Carl Rogers

Recently Debbie Jacobs, founder of Fearful Dogs and a follower on Twitter, shared the following interchange with the human:

i don't expect my dogs 2 love me unconditionally. they know as well as any1 when I'm being a jerk
22 hours ago Favorite Retweet Reply

Now now there is room in unconditional love for jerks mt@fearfuldogs don't expect dogs 2 love me unconditionally. they know when I'm a jerk
10 hours ago Favorite Reply Delete

This got me thinking about unconditional positive regard. This is part three of an occasional series of blog posts about my therapy dog view of different psychological theories. For parts one and two, check out An Ecological Approach to Life: Urie Bronfenbrenner and Erik Erickson: A Therapy Dog's View.

Let's  meet Dr. Rogers. The human never actually got to meet him. He did, however, spend some time studying with one of Carl Roger's doctoral students, Marshall Rosenberg. If you are interested, by the way, there is a long documentary of Carl Rogers doing group therapy. Click here to watch the documentary called "Journey Into Self."

The View From Here: About Last Night Edition 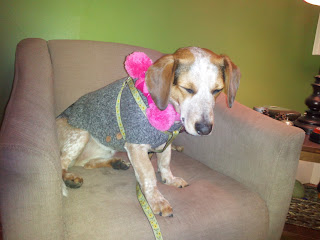 I don't know about where you are, but here it's awfully cold. If acting sleepy doesn't convince people to keep you indoors, layers are important! 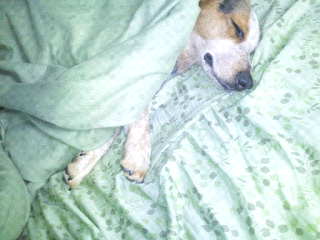 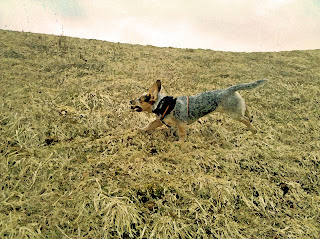 This article was spotted by a friend on Twitter. It's worth sharing. We've moved toward being a culture that is afraid of certain kinds of dogs and forget that by in large, the problem is with how people train and treat dogs. Check out this story about pit bulls as therapy dogs and keep it in mind the next time you encounter breed specific legislation in your local communities. (read more about BSLs here and here.
Of particular interest, by the way, is that breed specific legislation in Bermuda would make me a restricted dog. Can you imagine someone wanting to restrict Magnolia Wigglesworth? That's ridiculous. Check it out here.
AUSTIN (KXAN) - In the gymnasium at north Austin's Gullett Elementary School, a young boy sits on the floor with a book in his lap. The child is trying to sharpen his reading skills and he has a helper. Actually, he has two helpers: a woman who is volunteering her time and her dog.
Across the room, Patti Brauss, a 14-year veteran physical education teacher, watches with a grin on her face.
"There are kids who absolutely light up when they see a dog and that builds bridges sometimes if there's a stressful situation in the classroom," said Brauss, "or a skill the child can't do, and by being able to share that with a dog or be motivated by the dog, we can't do that as humans. It's the power of the petting."
On the gym floor another dog rolls over on her back and accepts some of that petting from another student.
"I think she's precious," the child said. "She's precious; she's a precious dog."
Nearby, another girl bends down and kisses a dog on the head.
Nearby, another girl bends down and kisses a dog on the head.
It's not just the kids that are getting into it all. Owner Ashley Arkin brought her dog to the gym.
"It's that emotional connection that just breaks you down and brings you back to your primal self," she said. "I love it; I love helping other people and the best thing I can do is help others with my dog."
The thing is, though, Arkin's dog is not just any dog. He's a pit bull dog! That's right, the breed that many people condemn as vicious and uncontrollable. Type "pit bull attacks" into Google and you'll be deluged with over 2,000,000 hits. Pit bull owner Lydia Zaidman begs to differ.
"They love people; they're extremely tolerant of people." Zaidman said. "Of course, each individual one has to be temperament tested and each one is an individual like any other dog. But in general, they temperament test very high. They really love people; they like to be around people and so they do really well."
Click here for the rest of the article

Email ThisBlogThis!Share to TwitterShare to FacebookShare to Pinterest
Labels: BSL, Community, Fear, Inspiration, News, Relationship, rescue
Newer Posts Older Posts Home
Subscribe to: Posts (Atom)
Therapy Dog (n): (1)A dog training to provide affection, comfort, and love in therapeutic settings; (2) A gentle presence that makes talking about hard things just a little easier; (3) A clown that reminds us that even when things are difficult, the uncomplicated animal-human bond can make us smile.