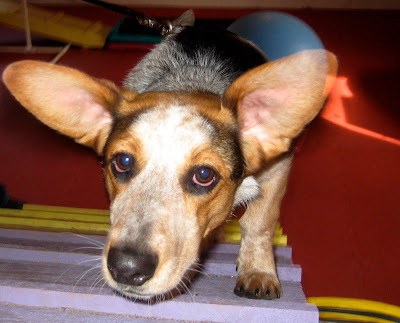 Basic obedience skills are a must for every puppy. Sit, stay, down, off, leave it. I've been learning those commands since the first day I came to  my new home. It was fairly easy for me to get these basic concepts. For the first couple of weeks, every time I sat down Jason made an enormously big deal out of it. He spoke in this high pitched voice, petted me, and consistently gave me a bit of something to eat and made this clicking sound with a device around his wrist (for more on my puppy-view of clicker training, check out this blog post). What a fun game, no? All I have to do is sit down and great things happen to me. Why on Earth wouldn't I want to sit?

Now that I'm becoming a teenager it's not as easy. Jason is great and all, but there are tons of things out there in the world that I want to investigate. Birds. That's a big one. I don't care what Jason says, if there is a flock of Canadian Geese in my field of vision I'm not going to remain seated. I'm going to go herd them. That's what I do. Same with squirrels--those pesky creatures. I'm not going to stay calmly in a down position when squirrels are darting around me. I'm going to chase them. It's in my nature. Oh yeah, and these bowls of food my dog teacher puts out in the middle of the room. Like I'm supposed to walk by them and not eat what is inside of them when Jason says leave it? What is Maureen thinking? 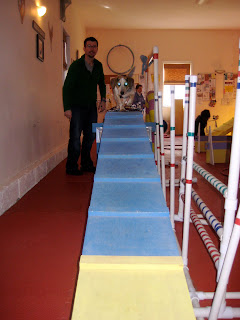 With consistent practice Jason will eventually reign in my impulses enough that I will be reasonable. I'll be able to do the things he asks of me. I'll do them most of the time. I'll sit and stay in a distracted environment. I'll leave delectable treats undisturbed. I'll even eventually learn to stop dead in my tracks when Jason says "STOP."

Rewards, by the way, are sometimes food, sometimes verbal praise, and sometimes play.

I am learning that when I do not listen to Jason, my rewards are taken away. Technically, this is called a negative punishment. This means that a pleasant activity is contingent on a particular behavior. If I play too hard and endanger other people, play immediately stops and does not start again until I am calm. This is a hard one since everyone loves me, but Jason is starting to train the people around me to stop paying attention to me if I jump on them. I learn that I do not get attention if I leap onto people.

Confused about the language? You aren't alone. Check out this previous blog post for more than you probably ever thought you needed to know about operant conditioning.

There is another reason why I'm learning to reign in my impulses and listen closely to Jason. It's something that many dog training classes and books don't ever talk about--and if they do it's always seems to be a one-sided discussion. I'm developing a relationship with Jason. He is paying as much attention to me as I am to him.

The basis of this relationship is trust. That trust has been built through the consistent operant conditioning that Jason has done. Good things happen to me when I'm around Jason. I focus on him, I get rewarded. I do the things he asks of me, I get rewarded. I am never yelled at or punished for these behaviors. I learn to trust that when Jason and other humans are around, good things happen to me. With this knowledge I can move through the world with a lot of ease. I am curious. I explore. I meet new people with an easy attitude and fearless nature.

Despite being a generally gentle dog, Jason has discovered on a few occasions that when a new and potentially dangerous situation crops up, I will march right in front of him, stick my tail straight out, raise the hair down the center of my back giving me a fierce mohawk, and growl for all I'm worth. I will protect Jason. I'm learning something else--I'm learning that Jason does the same thing. He is willing to put himself between me and danger. He keeps me safe. I keep him safe. It's a reciprocal relationship. 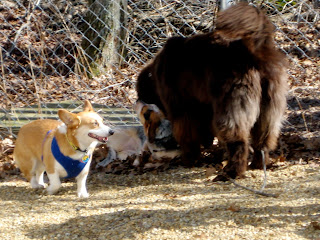 Embedded in this is a message that Jason is just starting to understand (he can be a little slow, no?) With this deep trust comes a flow in the dog/human relationship. This is much more complex that the conversation that is usually had about the dog/human relationship (if the conversation is had at all). One popular believe is that being pack animals, dogs need a leader that is always dominant. The human needs to be this leader, and needs to unquestionably be in charge. The dog must unquestioningly be submissive.

As a psychologist, Jason has always found this to be rather suspicious. He has sat with people in a helping role for seventeen years. These relationships have been reciprocal. Sometimes he is in charge, sometimes he is not. Sometimes he leads, sometimes he follows. Sometimes he jumps out in front and will fiercely protect his clients from danger, other times his clients will reach out and protect him. He follows this dance in psychotherapy closely. Being in the role of psychologist there is an inequity in power: the psychologist directs this give and take process and is ultimately responsible for keeping his clients safe. Jason decides when it is appropriate to follow, and gladly does so when it is in the best interests of his client. He also decides when he needs to lead. He also does that in the best interests of his client too.

Being a little slow (did I say that already?), Jason is discovering the same thing with dogs.  Dominance and submission isn't an either/or thing. Being a wise leader, Jason is learning how to dance with me.  He's learning that sometimes he's in charge, and sometimes I am in charge. Sometimes he decides, sometimes I do.

This is why I'm learning to listen to Jason even when I'd rather not. We are building a relationship. I know he keeps me protected. Still, the squirrels are powerful creatures. That's why I am always on a leash when Jason cannot fully be assured that I am protected from danger. He also doesn't leave food sitting on the floor since he knows I'll ignore him. I am after all, a dog!

What have you done to build your relationship with your dog?
Posted by Unknown at Sunday, March 07, 2010

Newer Post Older Post Home
Subscribe to: Post Comments (Atom)
Therapy Dog (n): (1)A dog training to provide affection, comfort, and love in therapeutic settings; (2) A gentle presence that makes talking about hard things just a little easier; (3) A clown that reminds us that even when things are difficult, the uncomplicated animal-human bond can make us smile.